The beginning of time was at the same time the beginning of life as we know it. The beginning of time was the beginning of movement. For this reason, movement also happens to mean ‘life’. When I was asked by a Chinese master about which word we used for Qi in the Western language, I explained that we used the word ‘energy’ or the term ‘life energy’ upon which he frowned and commented “How strange!” Even though we use the word energy for Qi, a Qi master never uses it. Over the years, as my knowledge and first-hand experience of Qi has increased, I have realized that the meaning of Qi was “life-generating” but in fact, a life without its subject … In other words, life is being generated on its own and yet there is ‘nothing’ which generates life. Qi is not a ‘thing’ but it is the life-generating principle. For this reason, even if we are able to observe the after-effects of Qi, it is not possible to observe Qi itself. Qi means movement, vitality and life. If there exists such a thing as movement, then there also exists that which can move. Isn’t that so? Although we are able to observe the motions of the universe, what is the “thing” that moves the universe? Even though the universe is in motion, there isn’t anything which causes its motions. Even one step further, the universe is the motion itself, but its subject does not exist. The same applies to Qi. Qi is life itself, but it has no tangible existence that provides this life.

There are two elements in our body that make life possible: Qi and blood. Blood is yin and qi is yang. The blood follows the movement of qi and at the same time influences the movement of qi. Blood and qi always go hand in hand. Hence, if there is blood somewhere there is also qi and likewise there is blood if there is qi. As long as the blood and qi in all parts of the body flow in an unconstrained and balanced way, the body will be healthier. When the flow of blood and qi begins to weaken or stagnate somewhere in our body, life and vitality in that area will also weaken. Qi stagnates sometimes by decelerating and sometimes by accelerating in an imbalanced way, thereby leading to exhaustion, and eventually becomes blocked. Since qi always follows blood and blood always follows qi, when qi can no longer flow blood cannot flow either. This causes the blood and qi to stagnate first in a certain place, then to become blocked through intensive coagulation due to complete inability to flow, and ultimately this causes the blood in that place to rot thoroughly and become toxic.

Coagulated blood due to blockage within the liver.

The same applies to the environment we live in. What qi and blood represent for the body corresponds to what wind and water mean in a location. Water is yin and wind is yang. The harmony of water and wind brings about a constant fertility and vitality. In nature, qi always moves by drawing curves. Sha, on the other hand, moves in the form of long and straight lines. Even today, for this reason, sha stones are installed on the front doors of many houses in the Far East to be guarded against the “poison arrow” or sha, the deadly energy, especially if the house is located at the end of a long street. For the same reason, the roads leading to the houses and bridges along the way are designed in zigzags or curved movements so that qi can flow freely. Why does sha move along straight and long lines? The answer is quite simple: Excessiveness brings about death. The movement is moderate when it consists of short intervals, but it causes damage if it lasts for a long time. 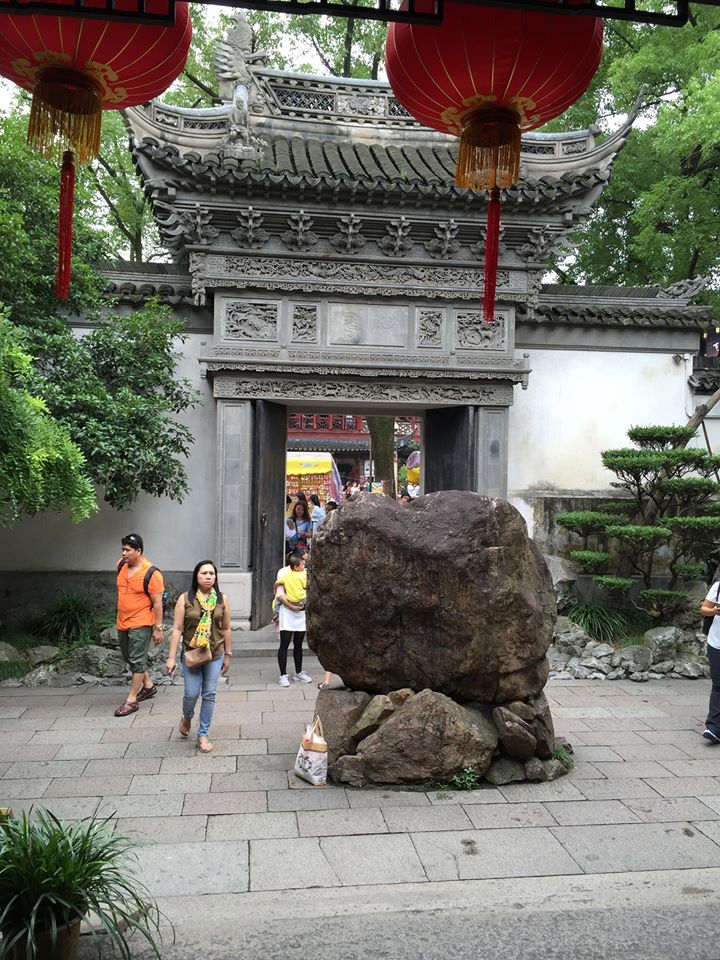 The sha stone in front of the main building of the Yü Gardens in Shanghai. 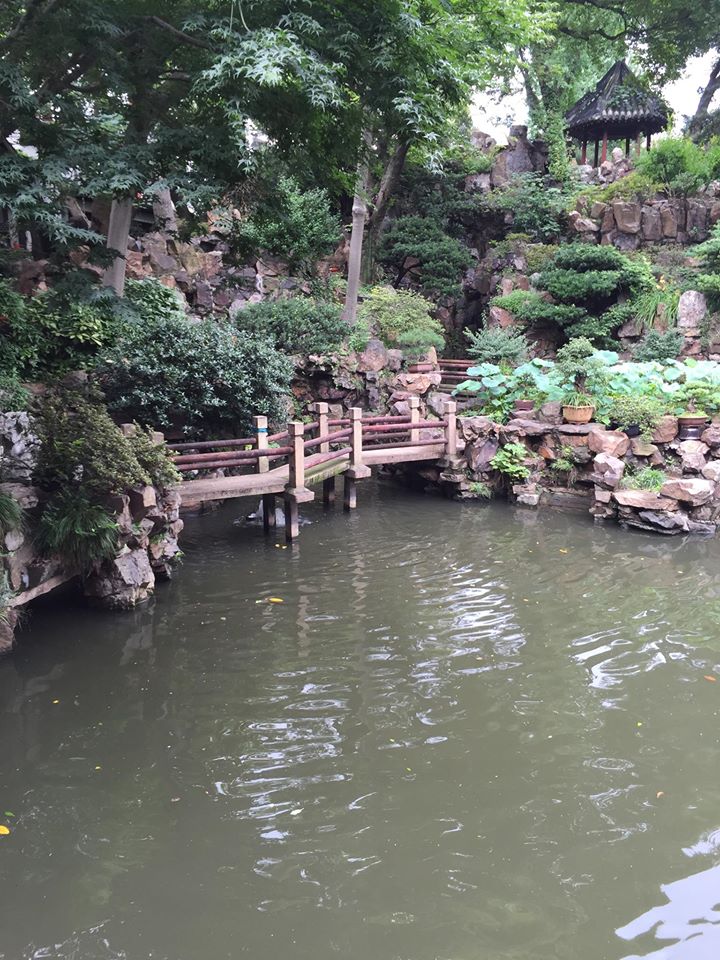 For the same reason, greed generates stagnation and death, whereas timely letting go, moderation and being content generate life. When the wind blows at short intervals, it does not cause much damage even when it is severe. When a storm lasts too long then it generates destruction and death. Similarly, greed means finding death when chasing life.

Throughout the ages, life-generating methods have emerged from the basic quests of masters of qi and the mind. Naturally, while discovering the element that generates life it was inevitable to discover the death-generating element as well. In 1997 China used this principle to ensure that Hong Kong was taken back from the United Kingdom. Dr. Baolin Wu was invited to implement the sha principle in the construction of the Bank of China Tower, designed by I. M. Pei. Dr Wu had created a design catastrophe despite the criticism from all the feng shui masters. The building of the Bank of China was a deliberately created feng shui disaster and the building was generating sha. This was a deliberate move because the sha, the deadly energy, generated by the building directly targeted the former colonial Administration Building. He was deliberately focusing on cutting the principle energy supply of the British administration. And that is exactly what happened. Immediately afterwards, two skyscrapers were built at a special point on the hills of Hong Kong, flowing like a dragon’s ridge, to climax the power of the Chinese-led Hong Kong. These two skyscrapers exactly corresponded to the eyes of the dragon extending from the mainland China to Hong Kong and after so many centuries of hardship, they ultimately revived the dragon and maximized the element that generated life in this way. 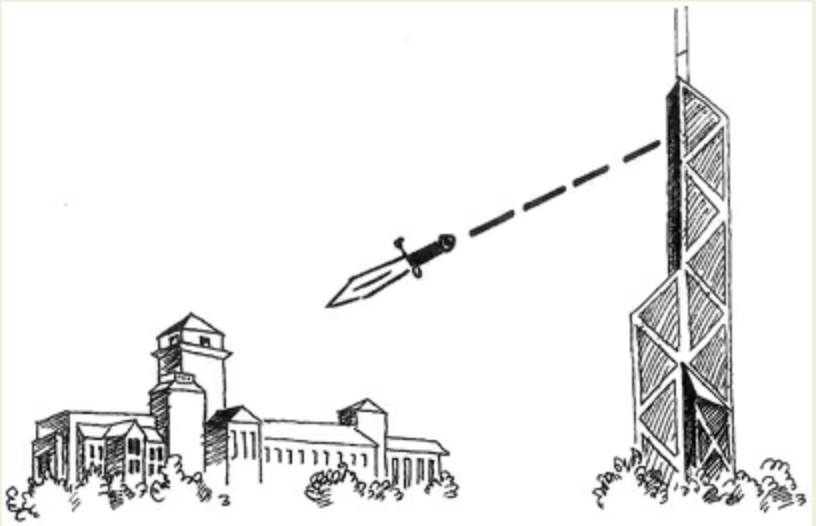 The National Bank of China is cutting the Old Administration Building just like a knife. 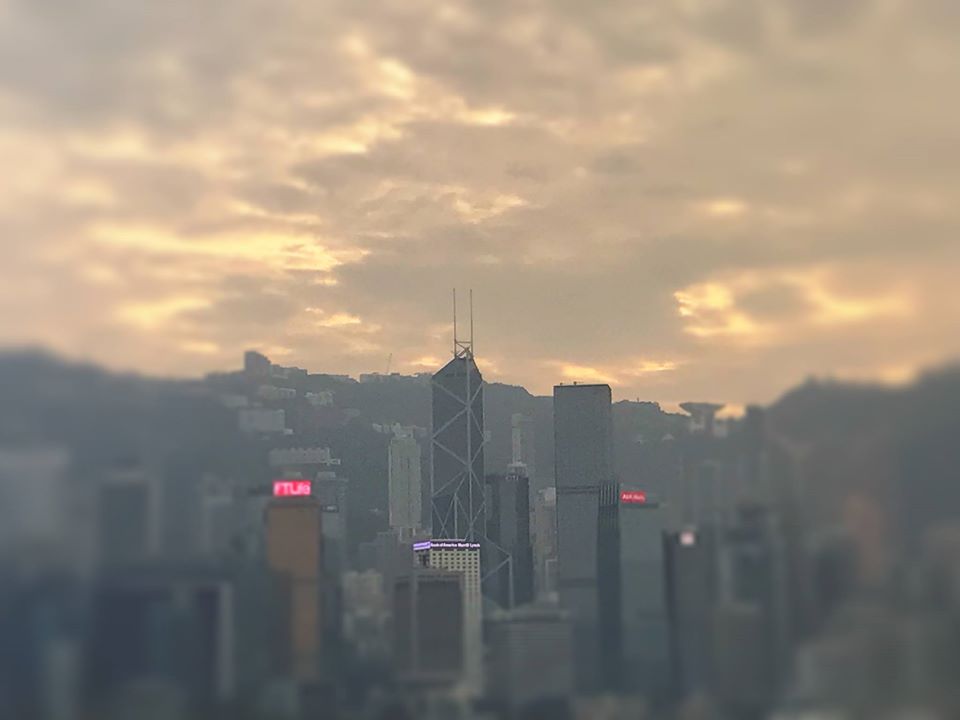 The National Bank of China as seen from my hotel room.

Qigong practices constitute the basis for bringing life back to the body or strengthening it within the body. Such practices were sometimes referred to as “feng shui of the body” by my master Jiang Feng. According to master Feng, the human body has its own feng shui just like spaces have their own feng shui. If the feng shui is correct in one place, then the life-generating element would be fertile. For this reason, we had to learn to use the life-generating element correctly so that we could train our students correctly.

When it comes to human body, the element that generates life needs to be regulated by the feng shui of the body and the mind. It is necessary to achieve the proper mobilization of blood and qi to regulate the feng shui of the body. To this effect, we use the Muscle-Tendon-Blood and Qi regulatory and Nei Gong practices at the Geng Men Pai School, the original Shaolin School. These ensure that the body is able to restore its health by means of perfecting the flow of blood and qi. Once the body has gained its health, it can use the extra energy it generates for mental development and to provide both health and correct understanding to others.

The feng shui of the mind goes hand in hand with the feng shui of the body, but it is a bit subtler. The feng shui of the mind allows us to find out how anger and greed, generating stagnation and death, can be replaced by compassion and generosity, generating life. To accomplish this, we first learn to stop embracing ideas and beliefs about ourselves and building an ego out of these. Ideas about ourselves create a sha that causes the energy to move on a straight line unchanged for a long time. Every kind of belief such as these, ‘I am so… I am such… I like this… I don’t like that… my preferences are these…’ causes the mind to create poison arrows or sha because of greed by moving unchanged on a single line. This kind of mind is a mind that sticks to its beliefs and therefore becomes rigid. Rigidity is always on the side of death. A liberated, deformable and flexible mind is always on the side of life because flexibility and movement are life.

The main objective of a true external and internal education is to create this flexibility both within and outside of us and to make the life-generating element fertile. In this way, while the body finds its health, the mind can awaken and reach its true nature, its eternal form beyond life and death.

Cem Şen Teachings are based on this principle.

I wish all my brothers and sisters a joyful and carefree life where the heart and the mind are in harmony.

About the Author: cemsen.com admin